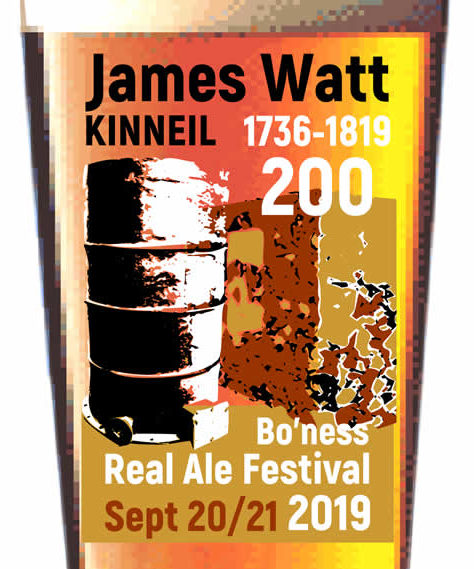 Every year since the very first festival, way back in 2001, the festival glass commemorates or celebrates something linked to Bo’ness in some way or other.

Last year it was to commemorate Bridgeness Pottery, the last pottery to close in Bo’ness.

This year is no different but it wasn’t quite as difficult, as it’s always a concern that we will run out of ideas! Last year we knew that this year would be a good bit easier to decide as there was a upcoming anniversary with links to Bo’ness!

The festival this year is tinged with both anticipation and sadness and there will be an additional commemoration on our glass.

We lost Gaius (Guy/Gus) Goodwin, one of our co-founders who died earlier this year in April.

He was a good friend, a well-kent face in the town and will be remembered by many chatting and serving behind the bar at the festival. 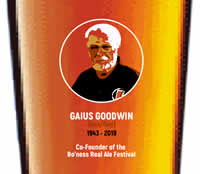 He will be missed and we hope everyone visiting this year will lift a glass and toast his contribution to the festival.

Without his untiring commitment over the last 19 years the festival would not have been the success it continues to be.

James Watt is often regarded as the father of the industrial revolution. He was a Scottish inventor, mechanical engineer, and chemist.

He improved on Thomas Newcomen’s 1712 Newcomen steam engine with his Watt steam engine in 1776. It was fundamental to the changes brought by the Industrial Revolution in both Great Britain and the rest of the world.

Watt’s critical insight, in May 1765, was to allow the steam to condense in a separate chamber separate from the piston and to maintain the temperature of the cylinder by surrounding it with a “steam jacket.”

Very little energy was absorbed by the cylinder on each cycle, making it more efficient. 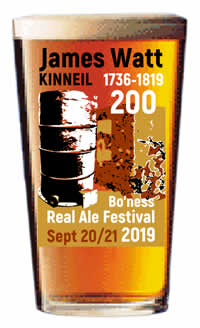 Although Watt had a working model later that year, there were still substantial difficulties in constructing a full-scale engine. This required more capital.

Substantial backing came from John Roebuck, the founder of the celebrated Carron Iron Works near Falkirk with whom he formed a partnership.

Roebuck lived at Kinneil House in Kinneil Estate, Bo’ness, during which time Watt worked at perfecting his steam engine in a cottage adjacent to the house.

If you have ever visited Kinneil Estate you will have discovered the shell of James Watt’s cottage and a very large cylinder, part of one of his projects which still exist to the rear of Kinneil House.

Iron workers of the day were more like blacksmiths than modern machinists. They were unable to produce the components with sufficient precision. Much capital was spent pursuing Watt’s invention. Strapped for resources, Watt was forced to take up other employment.

Through Boulton, Watt had access to some of the best iron workers in the world and the precision necessary to improve the patent. Watt and Boulton formed a hugely successful partnership, Boulton and Watt, which lasted for the following twenty-five years.

So, Bo’ness can lay claim to having been instrumental in helping lay the foundations for the Industrial Revolution.

Some of the above description was adapted from information on Wikipedia.