You are here: Home » A little bit about BRAAS

When and why Bo’ness Real Ale Appreciation Society…

In 2000 a group of drinking buddies decided it would be a good idea to celebrate that in 1601 Bo’ness was first opened as an official port on the upper River Forth.

There was a feeling that although the dock and harbour had ceased operating as a working port in 1959 it would be 400 years it had opened and deserved some sort of acknowledgement and celebration. It was also felt that it should be opened again, if not for industry, for pleasure.

And so what was to become the Bo’ness 400 started to take shape.

The idea that some sort of celebration should be held together with the proposal that the harbour should be re-opened was raised to get local support and ‘help’ and, of course, funding would be needed.

Local groups, local councillors, local people, local council were all canvassed for support and gradually there was a growing sense of a real possibility of a celebration in the town centre and on the foreshore round and about the harbour.

With the growing interest and ideas of what should be, could be, would like to be included an organising committee was formed comprising representative of local groups, local council, police, health and safety… the list could go on!

To cut a long and frustrating story short…

Falkirk Council eventually took on the overall task of co-ordinating all the required and necessary legal and health and safety compliance.

One of the suggested options was a beer tent (real ale, of course) on the foreshore but given the health and safety considerations regarding having glasses on the foreshore, it was suggested plastic tumblers would be the only option. Needless to say we simply said, “Well, you can do it yourself!”.

After much huffing, puffing, toing and froing the suggestion was made that, although not on the foreshore, Bo’ness Town Hall could be a good venue. So we said, “Yes, OK”.

And that is the how and why the Bo’ness Real Ale Festival is in Bo’ness Town Hall. As is turned out it was probably the right option as if it had gone ahead on the foreshore it would have ended there. 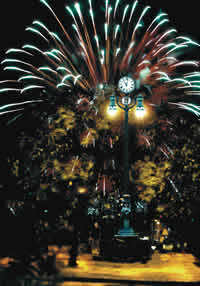 The weekend turned out to be a great success both in the Town Hall and in the town and foreshore.

On the Friday night there was a torchlight procession, starting at the fire station at the top of the town on Linlithgow Road, and by the time it reached the foreshore, travelling down Church Wynd there was estimated to be 10,000 people of all ages and from all around Bo’ness and surrounding areas.

Once there they enjoyed a magnificent fireworks display which is still talked about till this day. It’s often said that we should have another one!

And on the Saturday there was a craft fair, in the town and entertainment from local entertainers, Barony Theatre on various stages set up alongside the harbour.

At the end of the weekend and on reflection it was agreed that the weekend had been a great success and the decision made to make the real ale festival an annual event.

And there’s been one ever since! So, here’s to the future and many more of them!