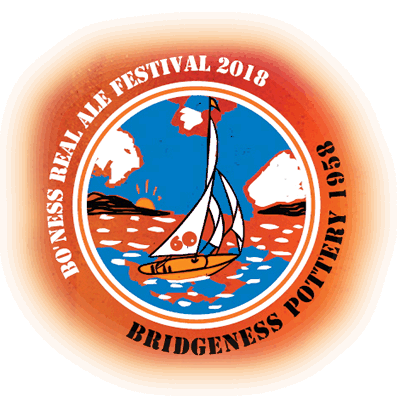 If you’ve been to the festival before you will know that you need to get a commemorative glass to sample the beers!

And, you will realise, each year your festival glass has a logo or theme.

Ever since the very first festival, way back in 2001, they commemorate or celebrate something linked to Bo’ness in some way.

Last year it was the saving and refurbishment of a mooring buoy from the now unused harbour & dock.

It was hoped that it would be in-situ situated alongside the dock by now, but we all know just how long the planning process can take!

It’s always a concern that we will run out of ideas for a theme but, something always seems to come along!

This year it commemorates the closing of the last pottery in Bo’ness 60 years ago!

Bridgeness Pottery – The Last in Bo’ness

In the 18th century, Bo’ness was one of the most thriving towns on the east coast and ranked as the third port in Scotland.* Among the town’s many thriving industries was pottery production. Bo’ness soon became established as one of the main pottery producing areas in the country.

Bridgeness Pottery was established in 1886 by Charles McNay, a previous employee of Bo’ness Pottery.

McNay purchased machinery, moulds and transfer pattern printing plates from Bo’ness Pottery when it went into liquidation in 1898, securing much of his predecessors markets.

[This year’s theme is a representation of one of the plate designs manufactured by Bridgeness Pottery.]

Pottery production in the town lasted for almost 200 years.

It reached its heyday at the end of the 19th century when three factories were operating simultaneously at Bo’ness, Grangepans and Bridgeness.

Opened in 1886 Bridgeness Pottery ended production in April 1958, due to staffing problems, not lack of orders.

With the last pottery closing as recently as 1958, the industry is still fondly remembered by many residents of Bo’ness.

On Saturday 15th June 1963 the 75-year-old Bridgeness Pottery razed to the ground by fire. Nothing now remains to suggest it was ever there!

Bo’ness’s last Pottery, which had been situated on the North Side of Bridgeness Road just west of Bridgeness Shipbreaking Yard, was destroyed ending yet another era of traditional industry.

* Some of the above description was adapted from local historian, Robert Jardine’s Bo’ness Potteries website and more about the potteries that were working in Bo’ness can be found there.